“Google Earth, which features historic satellite images often taken years ago, has had more than two billion downloads. Imagine how many downloads a ‘Google Earth Live’ app or real-time visualization of earth would attract?”

This comment came from one of the world’s top space entrepreneurs, Chris Newlands, at Expo2020 in Dubai last month. Over the next decade, satellite imaging capabilities are set to expand considerably.

As of time of writing, there are just under 5,000 working satellites orbiting earth. By the end of 2029, conservative estimations are suggesting no less than 107,000 satellites will be orbiting earth as we enter the 2030s.

This is largely due to the recent advancement of space technology, as the price tag of launching rockets and these satellites into space has reduced dramatically. In 2016, an Atlas rocket launch cost almost $15,000 per kg. Four years later, SpaceX’s Falcon 9 budgeted just $1,800 to launch.

Not only that, but it’s reusable and the same rocket booster has been successfully launched 11 times since. In the future, it is estimated that rapidly reusable star ships will be launched at only $200 a time.

The billionaire Space Race has firmly pitted Elon Musk vs Jeff Bezos. Musk’s SpaceX has already deployed 1,469 Starlink satellites into orbit and is targeting a grand total of 30,000.

TechRadar reports that Bezos’ Amazon Web Services (AWS) broadband satellite project has been greenlit by the US Federal Communications Commission for a total of 3,236 satellites to make their way into space by 2029.

Although the majority of the satellites going up are without cameras, these are equally important, as they form part of the infrastructure, transmitting images to ground stations at speed.

In fact, in the next few years Amazon Web Service (AWS) will have more than 20 ground stations built taking images and non-visual data from satellites and distributing them across the world.

They have a patent pending as they seek to secure the intellectual rights to ground stations as a service. If AWS are building the foundations to facilitate and protect a space to Earth data explosion, we should all take notice.

We all should also sit up and take notice of what China is doing. The country’s technologists who brought us the worldwide phenomena of TikTok, have just announced plans to launch a satellite in July to test a new technology that solely aims to give smartphone users almost instant access to high-definition cameras in space.

The technology would mean an area or event could be live-streamed from orbit to a mobile device on the other side of the planet – with a delay of no more than 10 minutes. That type of service is at present only accessible in the war rooms of some of the most powerful nations.

On war, we have all seen the satellite imagery coming back from war-torn Ukraine. As a result, Australia has created a Space Command to counter extraterrestrial threats from China, Russia and others, reflecting the role satellites play in the technological landscape for war.

New Players To A New Game

Although Airbus and Maxar currently have no known plans to exponentially increase their number of satellites, Airbus will launch two more NEO 30cm resolution satellites and Maxar has plans for a constellation of six satellites, which will pass 15 times daily.

Household camera brand Canon already has 10 satellites in orbit and has committed to delivering more than 100 by the end of the decade. Blacksky will more than double from 12 to 30, whilst other new players including the Sen Corporation which captures real-time video images from space, will add another 100 to the single satellite they currently have.

Alba Orbital, which currently has 19 satellites, will increase to 200. At present there are around 1,000 earth observation satellites orbiting the globe, which is just under 30 per cent of all satellites in space. By 2030, of the 107,000 satellites, only 4,000 will be termed as earth observation satellites. Whilst still a considerable increase of four times the current position, it will have less than four per cent market share. Prof. David Alexander OBE, Director of Rice University Space Institute comments: “With this large increase in the number of satellites in orbit, the world is gearing up to have an ‘always on’ perspective from space.

The average ‘revisit time’ of a satellite over a given location on the surface of the Earth is expected to decrease from about one day at present to less than 15 minutes by the end of the decade, providing an unsurpassed level of access to a rich array of information.”

One Space Entrepreneur May Just Have Seen This Coming

Space Entrepreneur Chris Newlands, CEO of Spelfie and Space2Consumer (S2C) Group was named as one of the Top 10 space entrepreneurs last year. His entry quoted that he was “set to underpin an entirely new technology sector as thousands of satellites are to be launched into space in the next few years.

Many of these will be utilised through his US patent, firming the relationship between humankind and satellites into a new era.” Newlands was granted a United States Patent in March 2021, which, in simple terms, gives his company control of interactions between humanity and satellites by merging satellite imagery with user-generated content.

“Having received the US Patent last year, this is enabling our company to offer current and future partners new S2C strategies, which will not only underpin an entirely new technology sector but will touch every vertical. Through satellite imagery, the relationship between humanity and satellites with imaging capabilities, offers exciting societal, climate and commercial opportunities which we are currently exploring with our new partners,” explains Newlands.

“These patents will become an essential layer in this new digital revolution, powered by cameras in space,” Newlands expands.

“The potential value of the patent and the ability to generate revenue will create new commercial models which will see new services and products on Earth. The distribution of the data and analytics of such interactions to commercial customers is also believed to be invaluable. There is a market that is already emerging and through our all-important US Patent and global patents pending, we are laying the foundations to a new world.

“The use of satellite technology is creating a new space infrastructure and transforming global industries and communications. The possibilities which will be created by the data flowing between eight billion people and thousands of cameras focussed on Earth are limitless, all underpinned by a more societal-driven ethos,” he adds.

As Newlands develops a licensing model for this new market sector S2C, he has already successfully launched the first S2C prototype. Spelfie is a mobile phone app that takes ‘space selfies’, capturing live events and attendees from space by merging location data and selfie images with a real-time satellite image.

Spelfie launched in 2019 and has already garnered millions of pounds in investment and numerous awards, including charting at 17th in the prestigious 2020 TechRound100 of global start-ups, leading the way as the Number 1 ranked Scottish SME. 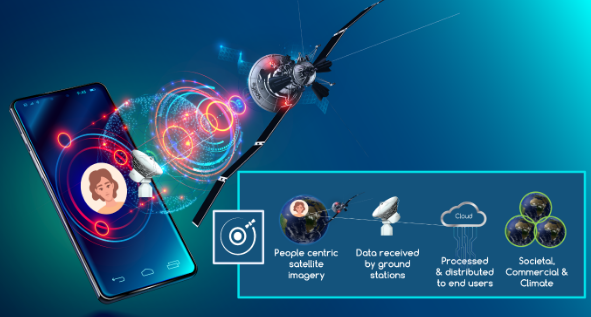 The first Spelfie was unveiled on the BBC on the 18th of November 2019, showcasing a message on a beach in Bali from a campaigning group, Bye Bye Plastic Bags, to rid the island of single use plastic bottles. It drew global attention resulting in the app reaching the top 10% of all app downloads in history in a matter of days. In January 2021, in the midst of a global pandemic, the Spelfie app was made free for all users across the world specifically for the world’s first socially distanced US Presidential Inauguration.

Spelfie tasked a satellite to capture images from space of President Joe Biden’s Inauguration and paired them with social media users across the world who wanted to be part of the celebrations.

The success of the Spelfie prototype has given Newlands the confidence that human focussed satellite to earth imagery will be a huge consumer success with little concerns on privacy with more of an emphasis on security and personal safety.

“Real-time satellite imagery will help us all make better, more informed decisions that could save not only time and money, but lives and even our planet.

“Live tracking from space of natural disasters including forest fires, mudslides, hurricanes and earthquakes would warn people and assist the relief effort. From a personal safety and peace of mind perspective, there are infinite use cases. For example, the enhanced satellite visuals could spell the end of young children and vulnerable adults going missing. And this can only help the world sleep better at night, under man-made stars.

We use cookies on our website to give you the most relevant experience by remembering your preferences and repeat visits. By clicking “Accept All”, you consent to the use of ALL the cookies. However, you may visit "Cookie Settings" to provide a controlled consent.
Cookie SettingsAccept All
Manage consent

This website uses cookies to improve your experience while you navigate through the website. Out of these, the cookies that are categorized as necessary are stored on your browser as they are essential for the working of basic functionalities of the website. We also use third-party cookies that help us analyze and understand how you use this website. These cookies will be stored in your browser only with your consent. You also have the option to opt-out of these cookies. But opting out of some of these cookies may affect your browsing experience.
Necessary Always Enabled
Necessary cookies are absolutely essential for the website to function properly. These cookies ensure basic functionalities and security features of the website, anonymously.
Functional
Functional cookies help to perform certain functionalities like sharing the content of the website on social media platforms, collect feedbacks, and other third-party features.
Performance
Performance cookies are used to understand and analyze the key performance indexes of the website which helps in delivering a better user experience for the visitors.
Analytics
Analytical cookies are used to understand how visitors interact with the website. These cookies help provide information on metrics the number of visitors, bounce rate, traffic source, etc.
Advertisement
Advertisement cookies are used to provide visitors with relevant ads and marketing campaigns. These cookies track visitors across websites and collect information to provide customized ads.
Others
Other uncategorized cookies are those that are being analyzed and have not been classified into a category as yet.
SAVE & ACCEPT